The competing team in town was Roger Waters, who had a few more customers than Kapotte Muziek (I assume, judging on middle-aged grey men in the train on my way back), but we played for a small and very attentive audience, a short set of Kapotte Muziek, going further with our extreme microphonics. Roel and I also played solo sets, so we kept them all around 20 minutes. No pictures were taken, just a recording. Players were: Roel Meelkop and Frans de Waard. Gig 116 08-04-2011 Bosch Acousmatic, Arnhem, The Netherlands.

download
Posted by Kapotte Muziek at 12:56 AM No comments:

The concert in Heerlen! Ah, what we started in Brussel, more noisy, more electric (not electronic) is expanded here and resulted in a concert Roel and me are quite happy about. No download as we may look for a label to release this as a CDR. Players were: Roel Meelkop and Frans de Waard. Gig 115 Kunstencentrum Signe, Heerlen. But Mike, who organised this put up these two video's on Youtube.


Posted by Kapotte Muziek at 9:14 AM No comments: 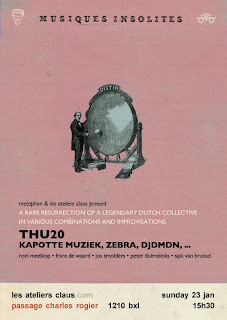 We played in Brussels as part of a long afternoon with five people. Kapotte Muziek, THU20, Zebra, Jos Smolders and DJ DMDN, so most of the five people played three times. It went really well and we're all happy with the whole event. Certainly something to be repeated. But somehow my recording failed. I am not sure what I can save from it, but its full of glitches, silence and a bit of music. I have to wait and see what Jos recorded of it. More later.  Players were: Peter Duimelinks, Roel Meelkop and Frans de Waard. Gig 114 23-01-2011 Les Ateliers Claus, Brussel, Belgium
Posted by Kapotte Muziek at 9:57 AM No comments: 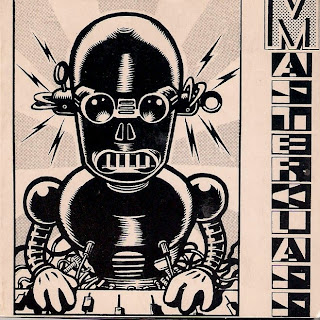 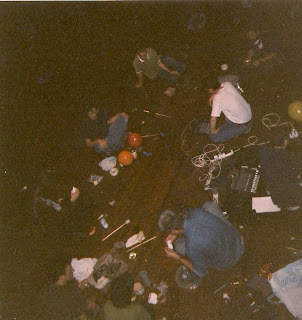 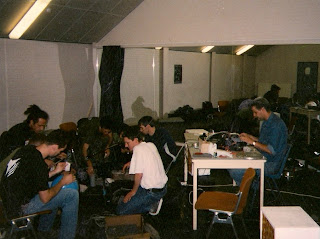 The final entry for now! Staalplaat organised an event at Korzo Theatre in Den Haag called Masterclass with performances by Etant Donnes, BmB Con, Charlemagne Palestine, Pita, Fredy Beckmans, Mika Vainio and we did our very first workshop. We had 9 participants, including Meeuw Muzak and Radboud Mens. Quite a lot of people, but it looked great. This zip includes the concert and the various sounds people recorded. Staalplaat also released a 3"CD where we have a small piece from our Kaiserlautern concert. Players were: Peter Duimelinks, Roel Meelkop and Frans de Waard. Gig 50 27-09-1997 Korzo, Den Haag, The Netherlands


This blog ran for 1 year with the first twenty-five years of Kapotte Muziek and from now will run for eternity with whatever comes on our way. Posting will be a lot less regular. Updates will be made in the posts when I have new material to access. I will create a side bar for those updates when the first one is done.
Posted by Kapotte Muziek at 7:29 AM No comments: 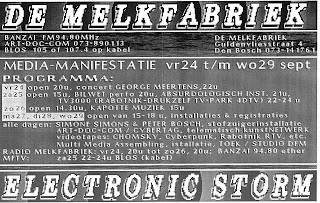 When Peter and I got back from our May 1993 tour we had no immediate plans to continue playing concerts as Kapotte Muziek, but our mutual friend Anton Viergever thought it would be a good idea to play at a festival he was organising called 'Electric Storm', at an art space called De Melkfabriek. It was a sunday early afternoon concert, around coffee time (well as the flyer shows us 15:00!), so the concert started with coffee cups and eating pastry. I think we had a great mixing board, in which also sound was running from DFM Radio, which Peter occasionally added to the mix. Still a great recording. An edited version was released on the Split LP (with Beequeen on the other side) by Wachsender Prozess. Players were: Peter Duimelinks and Frans de Waard. Gig 18 26-09-1993 De Melkfabriek, 's-Hertogenbosch
Posted by Kapotte Muziek at 9:47 AM 2 comments:

So Kapotte Muziek did some strange things, like playing on the railstation in Rotterdam but this concert beat them all. Steffan de Turck (also known as Staplerfahrer) organised a series of acoustic noise concerts in the streets of ZXZW festival in Tilburg (now called Incubate and moving further and further away from what I think is underground, although they label themselves as underground) and we were one. Actually it turned out alright and I released a 3"CDR on My Own Little Label (see/buy here) thanks to the recording and mixing of Jos Smolders. But someone made three films and put them on youtube. So that gives you an impression. Players were: Peter Duimelinks, Roel Meelkop and Frans de Waard. Gig 101 23-09-2007 ZXZW, Tilburg, The Netherlands

Posted by Kapotte Muziek at 1:52 AM No comments:

This was a gig organised by Jan-Kees Helms, who ran Lor Teeps and Little Seed and these days is back on track doing music and writing for Vital Weekly. Apparently its not recorded, or no such thing is in my archive. Also playing that night was BMB con and something by Helms, using McDonalds waste. I forgot under which guise that was. Roel reported sick that day. Players were: Peter Duimelinks and Frans de Waard. Gig 70 22-09-2001 De Kelder, Amersfoort
Posted by Kapotte Muziek at 1:43 AM No comments: 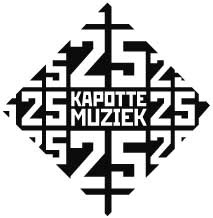 October 1st 1984 marked the birthday of Kapotte Muziek. From 1 October 2009 to October 1 2010, we will post on relevant dates the history of Kapotte Muziek. This can be short stories, photos, flyers, audio recordings (in either .wav or .mp3, or through links to third parties) and perhaps even film. All of this free for you. If you have anything yourself that you would like to donate to this archive, be it live recordings, photos, concert footage, please contact